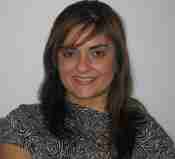 In January 2006, while in my early thirties, I suffered a stroke that initially paralyzed my left side. I was placed on a rehabilitation programme and made some progress in regaining mobility. However, 2 years after the stroke, walking was still very difficult because my left foot was permanently turned inward and pointing down so that I could barely put my left heel on the ground. Also, my left arm was always bent tightly at the elbow and my left hand remained clenched and flexed at the wrist.

I was desperate to try to regain further functionality of my left leg and arm but doctors had advised me that, because of the stroke damage, I should not expect to gain much more improvement. While searching the internet, my sister found some information on remarkable results being obtained by using SCENAR therapy to treat stroke sufferers. Upon making further enquiries, I learned that Michael Butler was using SCENAR to treat patients at his clinic in my home city of Adelaide.

When I first came to see Michael in February 2008 I was hopeful but apprehensive about what he may be able to do to help me. After Michael had assessed me, he decided to work initially on treating my left leg and foot. He identified key muscles that were not working properly and so were preventing normal walking. Michael used SCENAR therapy, together with a number of other supporting techniques.

I continued to see Michael twice per week for treatment and after a couple of weeks there were definite signs that the problem muscles in my left leg and foot were starting to work again. This was a great encouragement to me! The twice weekly treatment continued, with work on my problem left arm and hand being added to my treatment sessions. Michael stressed that it was important for me to supplement the clinic work with a series of daily exercises that he devised specifically for me. The exercises have been modified and become progressively more challenging as my body has become stronger. Now each clinic session includes a carefully supervised routine of remedial exercises, together with the SCENAR and other treatments.

After 16 months of treatment, I am now able to walk quite normally, and can straighten the left arm that had been bent for so long. I have improved so much under this treatment programme. With Michael’s help I have been able to disprove the gloomy medical assessment that I would just have to accept the limited mobility that I still had two years after my stroke. I am continuing to improve my strength and mobility and there is still more work needed to reach my goals.

Michael stated from the outset that teamwork would be the key to achieving the best results, with him doing what he could do, supported by me doing the remedial exercise programme that I had to do.

For anyone who has suffered a stroke there are both physical and emotional traumas to overcome, and Michael has helped me greatly in both of these aspects.

I would like to express my appreciation to Michael for the work he has done, and continues to do, for me. I can strongly recommend his clinic work, especially SCENAR therapy, to anyone who suffers pain and physical immobility.

Note that results from our treatments may vary for different individuals.