SCENAR Therapy is a revolutionary therapeutic medical modality that utilizes computer-modulated interactive electro-stimulation to prompt the body to heal itself.

The SCENAR (Self Controlled Energo Neuro Adaptive Regulator) is a hand-held, therapeutic medical device (ARTG 101783). The SCENAR is licensed by the Australian Therapeutic Goods Administration to treat pain and physiological dysfunction. What Are the Benefits of SCENAR Treatment?

As a method of healing tissue injuries and correcting imbalances in posture and vital energy, SCENAR works on a number of different levels. While it can be used on the general population to heal physical pain, to relieve anxiety and stress, or as an anti-aging treatment, it is also invaluable for athletes seeking improved performance gains from their workouts and competitions. It can help to train muscles for optimal performance and improve recovery times between exercise.

A Treatment for People of All Ages

SCENAR is a treatment modality that can be applied successfully on all ages, ranging from babies only a few weeks old through to seniors over 100 years old.   Treatment is painless, non-invasive and comfortable for patients.

Positive Outcomes for People of All Levels of Fitness and Agility

Great outcomes can be attained in people of all levels of fitness and agility, ranging from elite sports stars to those for whom serious exercise is no more than walking from the home front door to check the mailbox! The one common and essential requirement for every successfully treated SCENAR patient is the willingness to give the treatment a try.

Teamwork between the Therapist and the Patient

For patients who gain the optimum results from their treatment, it comes down to teamwork between the practitioner and the patient.   In a treatment session the practitioner must provide the therapy that is appropriate for the individual patient’s needs.   In between sessions the patient must apply the practitioner’s advice on what to do and what not to do in regard to activities, rest and specific exercises.

SCENAR treatment can be applied safely by people with very little training, provided that some basic contra-indications and cautions are obeyed:

In the hands of a highly-skilled SCENAR professional quite amazing results can be achieved, far beyond what a relatively untrained person could accomplish.  Therefore, always ensure that your SCENAR Practitioner is fully trained for the treatment required.

Why is SCENAR Different from Other Treatments?

SCENAR therapy is different from other therapeutic stimulation because of the type of electronic stimulation it produces. The SCENAR device interacts with the body through the skin to precisely and simultaneously locate, measure and treat problem areas (asymmetries) to help relieve pain and restore function.

Where Does SCENAR Come from?

SCENAR was initially developed by doctors and scientists within the Russian space programme in the late 1970’s to cope with the unique problems of space travel. Today SCENAR is a mainstream medical modality in Russia and there it has very many diverse applications in hospitials and medcial centres. SCENAR eventually was introduced in many other countries around the world and is now available in Australia.

How Does SCENAR Work So Successfully?

If the brain does not receive a reply back from a sent message, sooner or later it says, effectively, to the non-responsive are “Well, if you are not talking to me, then I am not talking to you and you are on your own!”

That is what happens after a stroke when a patient is unable to move a particular limb. In a less serious communication breakdown, there may be an intermittent or slowed communication between the brain and a specific part of the body. 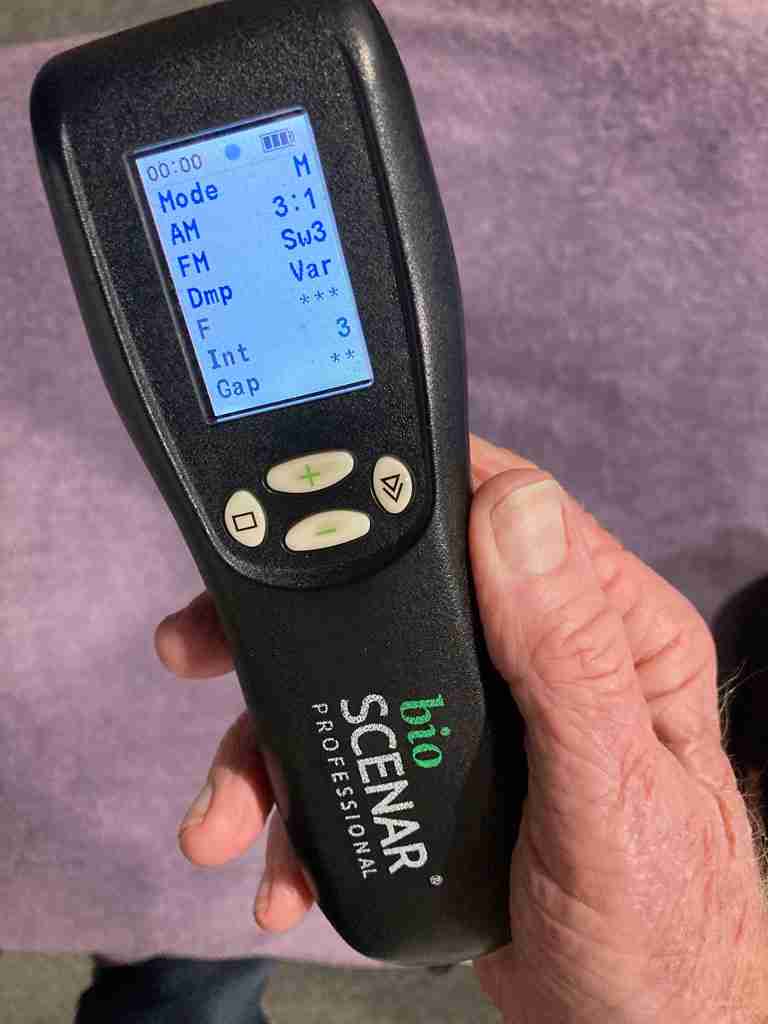 Also, in the body the brain produces hundreds of pain-relieving substances grouped as peptides and neuro-peptides which are directed by messages from the brain to send these substances to the area where they are required.

In the 1970’s a team of Soviet scientists recognized these communication problems and set out to develop an answer to the dilemma. What they developed was a device that can perfectly imitate the same kind of signal that the brain produces when it needs to send messages to various parts of the body.

The scientists figured that if they could invent something to imitate and stimulate the brain’s communication messages in those circumstances when the normal brain signal is stopped or hindered, it may be possible to restore normal communication.

Because the SCENAR signal is such a good impersonation of the brain’s own generated signals, the patient’s body is happy to work with the SCENAR and is the key reason why SCENAR Therapy has such a successful compliance response when treating patients with such a diverse range of dysfunctions.

Our ongoing health relies on the continuous exchange of information within the body. Every function of the body is inter-related and works in harmony with other functions – that is until stress, injury or disease disrupt that communication.

The SCENAR communicates with all functions of the body through direct contact on the skin, tuning into the body’s inner communication, and understanding the body’s needs from the signals being sent back and forth.

The SCENAR responds to these signals accordingly with gentle electrical impulses that communicate with the nervous system to stimulate the body’s own healing process.

This process used by the SCENAR is called Reflex Biofeedback, which is an ongoing, reflex conversation that proceeds in real-time, at biological speed and requires no conscious mental activity

The SCENAR device sends out a series of electrical signals through the skin and measures the response. Each signal is only sent out when a change, in response to the previous signal, is recorded in the electrical properties of the skin.

Visible responses from SCENAR Treatment include:

The C-fibres, which comprise 85% of all nerves in the body, react most readily to electro-stimulation and are responsible for the production of neuropeptides and other regulatory peptides.

The body can get accustomed to a stable but wrong pathological state, which may have been caused by injury, or disease.

The SCENAR acts as a catalyst to stimulate the C-fibres to produce regulatory peptides for the body to use where necessary. It is these neuropeptides that in turn re-establish the body’s natural physiological state and are responsible for the healing process.

As these peptides last up to several hours, the healing process will continue long after the treatment is over.

What Conditions Can SCENAR Treat?

SCENAR gives pain relief. The effectiveness of SCENAR Therapy for pain relief is substantial and lasts longer than other pain control methods.

The TGA registration of SCENAR gives approval for pain relief, but does not mention specific conditions.   However, pain can be experienced in every part of the body.

Therefore, if pain is relieved after  SCENAR treatment, it follows that the body part that had previously been feeling pain must have been positively affected.

SCENAR therapy reactivates the body’s self-regulatory mechanism, helping the body to heal itself.

Homeostasis is a clinical term that means balance within the body.   For example, if muscles at the left of a certain point of the spine are pulling more strongly to the left than the muscles at the right of the spine, SCENAR can help to equalize the left-right balance tension so that the bent spine can become straight. (Whether the body is bent or straight, moving or stationary, is determined by the inter-relationship between the musculo-structure and the skeletal system of the body.)

Another example of homeostasis is the fine balance between the levels of different hormones in the body.  If the level of one particular hormone becomes either too high or too low relative to other hormones in the body, SCENAR has been shown to help in restoring the balance.

SCENAR Therapy Does Not Treat a Disease – It Restores Health.

SCENAR finds imbalances (asymmetries) in the body and treats them accordingly. SCENAR Therapy does not act upon just one specific part of the body or organ but on the whole body. The sole purpose of SCENAR Therapy is to stimulate the body’s own natural healing process, so your body can operate with maximum efficiency once again.

The large quantity of neuropeptides and C-fibres produced in the Central Nervous System during SCENAR Therapy can also result in the treatment on one area aiding the correction of chemical imbalances in other areas. This is why areas other than the one being treated can gain benefit, and even conditions such as sleeplessness, appetite and behavioural problems can be corrected.

Would SCENAR Help You?

If you aren’t certain, call Michael to discuss it further.